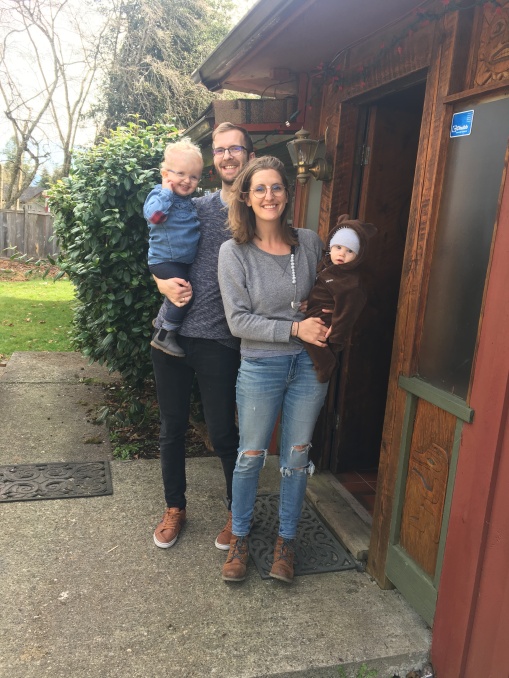 Break out the bubbly and let’s celebrate! The ProckyFam has been on the coast for one whole year today! And what a year it’s been. I don’t think when we bought this home we expected to be self-isolating in it from a global pandemic while pregnant with our third child, but here we are. I know a lot of people are curious so I want to talk about how this move from the city to a smaller town has been for us, plus how we’re finding living in the community of Gibsons itself. Here’s what you need to know!

The hardest thing for me has been the lack of walkability in our neighbourhood. For the last decade I’ve had the luxury of living only a block from coffee shops, grocery stores, bars, and parks, and it has been a bit of an adjustment for me to give up that #strollerlife I was used to. It’s worth mentioning though that I still haven’t gotten my license so that could be contributing to some feelings of being housebound (oops! I was going to start lessons this spring but now I have to wait until the pandemic has passed). I have always preferred to walk to stores than drive though, so not being able to that is a bummer for me whether I have my license or not. We still walk up to the shops from time to time as there’s a trail that takes us to our local bars, bank, hardware stores, and grocers, but it’s a solid 25 min trail walk to get there (while pushing a double stroller) so I can’t say I do it daily.

That said, moving from a 722 sq ft condo with three small windows and no direct sunlight to our big rancher with massive south-facing windows has had a positive affect on my personal mental health that outweighs living in a walkable neighbourhood, at least for me. Having two young children in a small, dark space was deeply impacting my happiness and contributing to anxiety when we were living in our small condo. I got out of the house as often as I could and we lived only a block from a large, walkable riverfront park, but you just can’t beat having access to outdoor space at home. My life as a stay-at-home-mom has drastically improved with the added space in our home and our yard. I feel like I finally have room to be a separate person from my kids now that we’re not living on top of each other and the kids aren’t waking each other up with their cries at night (they used to share a wall and Wells was in our bedroom). I’ve had far less anxiety attacks in the last year than any years previous. I distinctly remember the way I felt for the first couple weeks and months of living on the coast last Spring. I had space, my kids had space, we no longer had to fight for parking spaces… it just felt like I could breathe easier. That feeling has become the norm for me now, to the point where when we drive back to the Lower Mainland again to visit I can feel my body physically tensing from the stress of busyness and traffic.

Our House and Neighbourhood

Despite the grief it has given us in the first year we LOVE the house we bought! Being homeowners of an actual house feels totally different to us from being homeowners of a condo with a strata, fees, and strict rules. The responsibility and learning curve has of course been massive and various things went “tits up” over the course of our first year (you can scroll through a bunch of our adventures on Instagram here, if you’re curious!). Despite all of the crazy shit we’ve had to deal with so far we’re so glad to be masters of our own domain. We love the layout of our home, the open floor plan, the massive kitchen, the deck area, and the spacious yard. We love having a guest room with an ensuite so we can host family and friends for extended stays! We love that it’s a rancher and we love that none of the bedrooms border each other so no crying babies ever wake up sleeping babies; this is a big win for parents who are about to have 3 kids under the age of 4!

When it comes to neighbours we hit the absolute jackpot. The family across the street has two girls close to our kid’s ages who are always happy to come over and play (plus their yard has slides, a swing, a trampoline, a sand pit, and a zipline, plus a fully stocked beer fridge so…). We’ve known our neighbours for less than a year but they’ve happily leant us tools, trucks, and lawnmowers. When Tom totalled our only vehicle last summer after hitting a deer the family across the street gave us their SUV for two weeks while we looked for a new one (we have since bought a truck and were able to repay the favour for a few months when one of their vehicles died!). When we first moved in people stopped by with planters full of local beer and batches of fresh cookies still warm from the oven. A few months ago we found a pristine booster seat on the doorstep and still don’t know who left it there. These are the kinds of neighbours that come by with fresh produce when their garden is overproducing butter lettuce, who come over with hot dogs and beer when we’re around the fire, and who bring their tool belt over when Tom’s out of town and I’m stuck on a DIY, the kind of neighbourhood where we order pizzas to the front yard in the summertime and eat them while the kids ride their bikes in the street. The kind of neighbourhood where my friend across the street had a way more excited reaction than Tom when I told her I was pregnant, haha. When we first moved in I thought we had gotten particularly lucky but I’ve since met so many people on the coast who have said the same thing about their own neighbourhood that I’m starting to think it’s just how coast neighbourhoods are.

The cons first. There is good food here but anyone who has come from the city would undoubtedly miss the diversity of culinary options there. I miss middle eastern food sooo bad. In Gibsons we have fantastic Mexican food, sushi, pizza, pubs and breweries, a Greek place, a bomb Italian place, coffee shops, donuts, and some hole-in-the-wall diners, but I would definitely sponsor someone to come open up a Lebanese restaurant (Nuba, anyone?). Another con is that if you’re moving here from the lower mainland the parks on the coast are going to seem absolutely pitiful to you. There are some great ones but nothing that comes close to comparing to something like Queens Park in New West (and since there are water bans in effect here for the hotter summer months, the one water park is turned off when it gets hot anyway).

That doesn’t mean there’s a shortage of things for your kids to do, though; there are many beaches on the coast and in Gibsons any of them are only a few minutes drive away. Parents here take their kids to the local trails, the mountain bike park, the beaches, library drop-ins, Strong Start programs and other drop-in programs, some of which even provide excellent free meals for parents and kids (most I’ve seen are free or $2 if you want to sneak off and leave your kids for a little bit to do a workout).

A supposed con that turned out to be not an issue is the postal system. I was told when we moved here that Amazon deliveries to the coast would take about 11 days to arrive and that they would never come to our door, but most Amazon deliveries we’ve ordered have come in 3-4 days and come straight to our door every time (only one Amazon delivery went to the post office in the last year because it was super oversized). It’s not the same day delivery we enjoyed when we lived in the same city as the Amazon warehouse but we don’t mind at all; instant gratification probably isn’t good for people anyway (and before anyone roasts us about using Amazon, please note that we try to support small, local businesses whenever we’re able, but sometimes availability and price on the coast necessitate buying stuff from a large corporation).

When it comes to the Coast community though, by far what has made us the most sure that this move was the right choice has been the people and the welcoming nature of the community itself (though of course the rugged coastline views don’t hurt either!). We lived in a condo for a year and never met any of our neighbours. The community in Gibsons looks out for one another in a way I know we would never see in a larger city setting. It’s very easy to meet people because you see the same people are town at the beach, at preschool drop-off, at the coffee shop, and especially at events like the summer night market which brings out pretty much everyone. While it’s easy to meet people, we’ve found it a bit tougher to really make friends, but we have only been here a year and know good friendships take time to form (not to mention we’ve been so busy with our house this past year it hasn’t left much time for anything else!). The winters can be a little isolating socially, as with any community, but invitations to deck hangs, beach hangs, boat trips, and BBQs abound in the spring and summertime. It’s been really fun getting to know a ton of new people.

Another amazing thing we’ve found about the coast is the sheer willingness to help others. I’ve seen the community jump at the chance to help a stranger move, lend their truck, drop off firewood to a family who is running low, donate supplies to a new mom, run to the pharmacy for someone who is housebound, or deliver soup to someone who is sick (last week I posted on Instagram about having a craving for cinnamon buns but no yeast and there was a cinnamon bun on my doorstep the next day). We have a community FB page dedicated solely to delivering groceries to those in quarantine right now on the coast. Local businesses and breweries are delivering groceries and supplies free of charge right now and it feels like anyone who asks for help will receive it. It’s amazing to see the community really pull together through this global crisis but honestly, people here have been helping others since long before the pandemic started.

We have truly enjoyed our first year here and are so hopeful about our family’s future in Gibsons! The Coast is proving to be a wonderful place to raise a family.

I’m a tee-shirt-and-jeans mom doing my best and raising my family on the Pacific Northwest coast on the unceded territories of the Shishalh and Squamish Nations. After three babes in 4 years I’m kinda rediscovering my identity as a person outside of parenthood.

I feel passionate about being a lifelong learner and this space is a place for me to explore, process, and share!